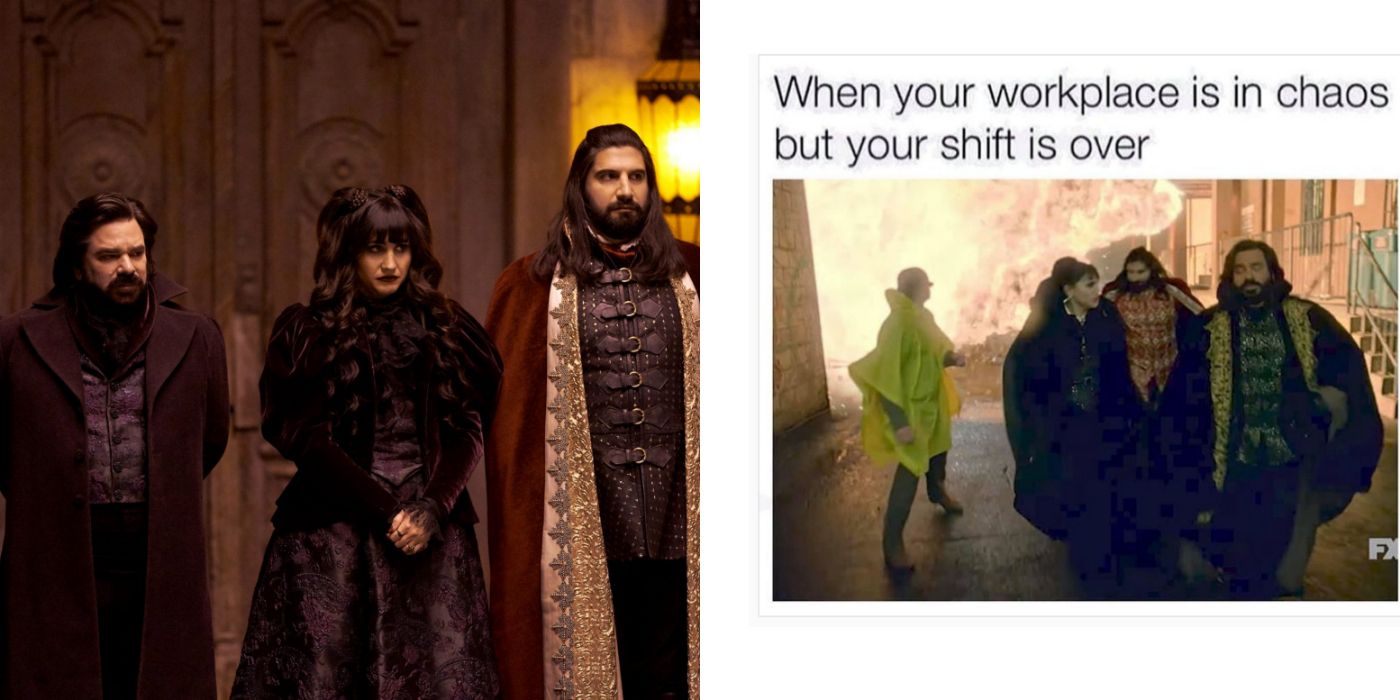 The funniest vampires in Staten Island are back for their fourth season, and Nadja’s nightclub has been a huge success so far. Viewers are eager to see what may unfold as the new Colin Robinson continues to grow. As usual, there is plenty of joyful chaos.

What We Do In The Shadows has a lot going for it, from top-notch comedy and sprinkles of pathos to a cast of bizarre and wonderful characters. The supernatural mockumentary couldn’t be summed up any better than with a selection of memes.

The vampires tend to make plenty of messes, whether it’s their feeding or some other shenanigans, and it always falls on Guillermo to clean up after them. He has to do a lot as Nandor’s familiar already, and somehow he usually ends up helping out the rest of the house too.

Related: 10 Quotes That Perfectly Sum Up What We Do In The Shadows’ Nandor As A Character

Guillermo does everything for the vampires to the point where his brief absence in season 2 leads to the house to fall into an utter mess and the vampires without clean clothes. There’s also the instance when the house fell apart in between seasons 3 and 4 after Guillermo was shipped to London.

There are a few core relationships in the show, and Nandor and Guillermo’s has always been a key one. It’s been more than ten years since Guillermo took up his position as a familiar and he doesn’t have much to show for it. Yet despite their ups and downs, the vampire and his familiar/bodyguard/best man do care for each other.

Nandor often speaks down to Guillermo, but he does care for him in his own way. He even stands up for Guillermo sometimes, the best thing Nandor has done on the show. Just as this meme shows, sometimes his attitude belies his true feelings.

There are many things Nadja hates, but maybe none more so than witches. The titular witches of episode 9 in the second season kidnap Nandor and Laszlo, and eventually endanger the rest of the crew. It’s revealed that her hatred for witches stems from when the head of the coven disguised herself as Nadja and seduced Laszlo.

This episode introduces a side character who exudes main character energy, Lilith, one of the best guest roles even if she was a nightmare for the vampires. This meme may not tell the entirety of the story, as witches aren’t just a conspiracy theory, but a real threat.

What We Do In The Shadows is full of classic quotable lines and jokes. One of the most beloved is from the very first episode when Nandor needed “creepy” paper to decorate for the Baron the line has been popular with fans of the show.

Related: 10 Hilarious Horror Comedies Like What We Do In The Shadows

There are still memes all across the internet recalling this hilarious line that was delivered so well by Kayvan Novak. Inserting him into Nook’s Cranny here adds an extra little comedic note to an already iconic line.

6 To Turn Or Not To Turn

In What We Do in the Shadows, most familiars serve their masters in the hopes of being turned, and Guillermo is no different. Since he was a child he has wanted to be a creature of the night, but no matter what he does, Nandor won’t change him.

At times, it seems he’d rather do anything else, which is why this meme rings so true. It’s easy to imagine that even someone as competitive as Nandor would rather torpedo his chance at victory than change anything about his relationship with his familiar.

Guillermo’s family history as descendants of Van Helsing was a huge reveal in the final episode of season 1. Furthermore, when he actually started slaying vampires, audiences and his housemates alike were shocked, most notably in the season 2 finale when he takes out the entire theater of vampires single-handedly.

Though this meme doesn’t quite capture the exact nature of Nandor’s reaction, it was still exciting for audiences to see this new side of Guillermo. Some may suspect Nandor’s feelings are stronger than he has admitted yet, that remains to be seen, but it’s growing clearer that he does have a strong fondness for the familiar/hunter.

Variations on the “cracking open a cold one with the boys” line are few and far between these days, but this old meme does highlight the entire premise of the show pretty well. Vampires in the modern day make for a comedic goldmine, and the show proves it time and time again.

Related: Each What We Do In The Shadows Character’s Most Iconic Scene

Though they’re often seen as figures of horror, taking a fresh look at how an ancient being such as the Baron might move through the modern world lends itself so well to comedy. All the zany and sometimes terrible things they do means punchlines galore.

3 Music Of The Night

​​​​​Nadja and Laszlo are the best couple in the show for good reason, whether it’s how supportive they are of each other’s independent ventures, or the way they keep rekindling their romance. One of their most notable couple moments was their act as the “Human Music Group” in season 2.

Fans were treated to more musical performances from Nadja and Laszlo during Nandor’s wedding season 4, and it’s always a delight when they perform. Their quirky musical escapades do call to mind more avant-garde acts than the Eurythmics, but the odd vibes make the meme work. Hopefully, they’ll perform again in future episodes.

2 Colin Robinson Is The Worst

Colin Robinson the energy vampire may have been reborn in season 4, but it hasn’t held him back from continuing to be a drain. The vampires of Staten Island now have to deal with wrangling an ever-growing child.

In his previous form, he was able to feed on energy by annoying or boring people into near-comatose states. He is even able to drain his housemates and other supernatural beings, making Colin Robinson the most powerful character on the show. Though high drama isn’t his thing, banal conflict between others like at the city council meeting is something he gets a lot of substance from.

If there is one thing every member of the household on this show does, that is causing some kind of mayhem. Sometimes it is on purpose, but usually, it’s through misunderstandings and ignorance. Regardless, it always happens, and they almost always flee rather than attempting to correct their mistakes.

They may not be coworkers leaving a chaotic shift, but the wake of destruction feels similar. The vampires of Staten Island know how to burn the house down, or in this case, Simon the Devious’s nightclub.

Next: Harvey Guillén’s Best TV Shows, According To IMDb