Posted by Mike Spring on Jul 19, 2022 in All, DVD/Blu-ray, Film, Reviews | Comments Off on US Blu-ray and DVD Releases: The Bob’s Burgers Movies, Men In Black, Yellowjackets, Reno 911, Good Burger, Devil In A Blue Dress, After Yang and more 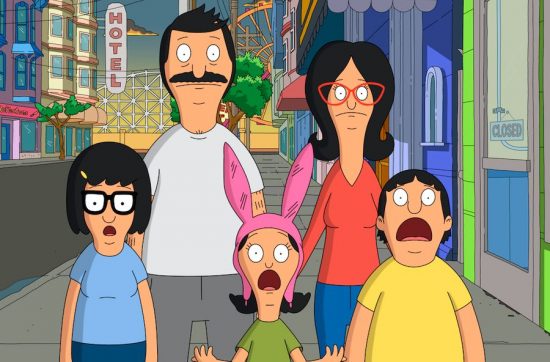 It’s a fun batch of releases this week, with some newer films, some deluxe anniversary editions, and a few oddballs thrown in for good measure. Check it out!

Okay, so I’m going to say this as someone who is decidedly NOT a Bob’s Burgers fan: I really enjoyed The Bob’s Burgers Movie. Now, when I say I’m not a fan, it’s not that I dislike the show; I’ve just only watched a handful of episodes and I’ve always found them to be fine, but nothing special. But the movie, well, that I had a lot of fun with. (In fact, it made me want to go back and watch more episodes!) The film sees a huge sinkhole erupt in front of Bob’s Burgers right as their bank loan comes due. To make matters worse, a skeleton is found at the bottom of the hole, turning it into a crime scene. All of which leads to a murder mystery while Bob and Linda are trying to save the restaurant. The film stays true to the show’s aesthetic, but the writing is sharp, the animation is terrific, and the musical numbers — of which there are a couple — are completely and utterly fantastic. I had so much more fun watching this than I expected to, so I can only imagine how much you’ll love it if you’re already a big fan of the show.

It’s easy to forget nowadays what a box office powerhouse Will Smith was back in the ‘90s, but if you need a good reminder, check out the new Men in Black: 25th Anniversary 4K Steelbook. Based on a completely obscure independent comic book, Men in Black sees Will Smith get drafted into the agency that keeps the earth safe from alien incursions and the like, while also keeping track of the many, many aliens who are already on earth. It’s a sci-fi comedy classic, with Tommy Lee Jones in full grumpy mode and Linda Fiorentino adding value in a third lead role. Watching the film in 4K Ultra HD revitalizes the viewing experience. There’s a depth to the film that I don’t think has ever been present on home video before; it reminded me of my experience watching it in theaters. The imagery is super clean and clear, and the colors are well saturated but still natural and never look artificial. The surround soundtrack doesn’t reinvent the audio experience, but you still get a lot of directionality in the various speakers, and the end result is a great A/V experience. This release comes in a beautiful Steelbook edition with terrific artwork, and includes a few new extra features, including an interview with director Barry Sonnenfeld. It’s an excellent packaging of one of the biggest hits of the 90s.

Batwoman: The Third and Final Season

It’s not often that a TV series changes its lead actor in just the second season, but that’s what happened with Batwoman when Ruby Rose decided she didn’t want to continue in the main role after the first season. The showrunners wisely decided to change the character entirely, so exit Season 1’s Kate Kane and enter Season 2 and 3’s Leslie Ryan, played by Javicia Leslie. And while Lesie brought a new energy to the show, it clearly wasn’t;’t enough to save it, as this third season home video release marks the end of the series. Although I know the series had its fans, I always found it an uneven (although occasionally exciting) show that didn’t need a major cast change while it was still finding its footing. Season Three has some moments that are good superhero action and adventure, but it also has a lot of talking (and then more talking). It’s not a bad season per se, but there are times I wished it would just move a little bit more. Still, if you were a fan of the series, this new set will nicely complete your collection.

I always liked Reno 911, despite the fact that sometimes it could remind me of a Saturday Night Live sketch that goes on just a bit too long. Overall, though, the show was a lot of fun, and now the entire crew is back for Reno 911: The Hunt for Q-Anon, an all new movie that sees Lieutenant Dangle and crew on the hunt for Q, the supposed leader of the online group Q-Anon. There’s a lot of politically inspired humor this go around, but for the most part, it feels like the usual cop-fueled silliness. As is normal for Reno 911, the film isn’t perfect; parts of it are improvised as usual, which results in a mix of sheer brilliance and painful groans. But it’s generally more fun than not, and after having had a break from the show for a few years, I enjoyed revisiting it. Plus, it’s hard not to enjoy seeing so many comedic talents in one place: the always terrific Thomas Lennon and the brilliant but underrated Wendi McLendon-Covey, plus shorter Patton Oswalt in a guest role. I don’t know if it’s enough to win over non-fans, but fans of the show will enjoy this crazy romp.

Colin Farrell stars in this new science fiction drama, which takes a look at life and loss in the framework of robot servants. Farrell plays a dad whose home android breaks. The problem is, his family (including his wife and young daughter) has become quite attached to the “techno sapien,” named Yang. As Farrell tries to have him repaired, he gets to view some of Yang’s memories, which leads to ruminations on family and consciousness. While the film ultimately falls into the sci-fi category, it is definitely more of a drama than anything else. If you’re looking for I, Robot: Part II, you’re going to be very disappointed. However, while it has some slower moments, the film creates interesting characters that you care about and Farrell (as well as his co-stars) is absolutely fantastic. It’s not the kind of film that I think everybody will love, but if you like your sci-fi on the more thoughtful side and you want a good character drama, After Yang will definitely fit the bill.

There’s no easy way to describe Yellowjackets, but I will say if you like things like Twin Peaks, Pretty Little Liars, Riverdale, Lord of the Flies, and Lost, it might just be up your alley. The show follows a high school girls’ soccer team whose plane crashes in the mountains. As the girls struggle for survival, things start to get more and more intense, and the inner lives of the girls start to become more outer. The show then flashes between the survival quest and events that are happening 25 years later, where the remaining survivors are receiving mysterious messages. The show occasionally gets weird and melodramatic more than might be necessary, but that also leads to some of the show’s biggest surprises and juiciest moments. The script is sharp and the performances are strong across the board, in both the young cast and the older adult cast, and the show will get you hooked pretty quickly. As a Showtime series, the show isn’t available on many streaming services outside of Showtime, so this new 4-disc DVD set is a great way to check out this intriguing new series.

Devil in a Blue Dress

One of Denzel Washington’s earlier starring roles, Devil in a Blue Dress sees the venerable actor play Ezekiel “Easy” Rawlins, an everyday guy with a (mostly) good head on his shoulders who gets roped into helping to find a missing woman. Of course, things quickly escalate from there, and it seems like everyone and their other is out to find this same woman, getting Easy into more and more trouble. Honestly, I had never seen the film before watching this new Criterion Collection edition of it, but it’s easy to see why it deserves a place in the Criterion halls. It’s a gripping neo-noir that really hearkens back to the 1950s film noir classics, with twists and turns, a femme fatale, and a gumshoe-like lead character. Based on the novel by Walter Mosely, the film also stars Don Cheadle, Jennifer Beals, and Tom Sizemore, and I was really impressed by it. This new Criterion Blu-ray (also available on DVD) sees the film remastered and restored, resulting in superior picture and sound, as well as some great ew extra features. A top-notch release for a top-notch film.

Okay, if you’re a certain age, then you’re going to be really excited about the new Good Burger: 25th Anniversary Steelbook Blu-ray. And if you’re not, well… you’ll probably be a lot less excited. This is a kids’/teens’ movie from the 1990s, and it feels like it. Based on a sketch from Nickelodeon’s then-red-hot show All That and starring Kel Mitchell and Kenan Thompson (better known as “Kenan and Kel”), it’s one of those movies that was never a blockbuster hit but is well-loved by a very particular generation of kids. Now, I never got around to seeing the movie originally, and watching it now — when it’s 25 years old and aimed at a completely different demographic — it’s obviously not geared for me, but it’s easy to see why kids liked it so much. It’s good natured and funny, but it’s also ridiculous and silly. I mean, it’s a Nickelodeon movie and it doesn’t try to be anything else. It’s not the kind of film you can analyze critically as a serious piece of cinema, but for a pure nostalgia blast, I expect a lot of people will be rushing out to grab this new release, which comes packaged in a sharp-looking Steelbook case.