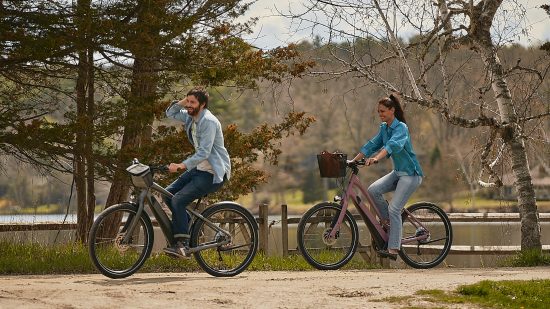 Jim Sturgess and Katie Holmes in ALONE TOGETHER. Photo by Jesse Korman

In March of 2020, with the proclamation of the COVID-19 pandemic, all of our lives changed forever.  The terms ‘social distancing’ and ‘lockdown’ became parts of our daily conversation.  We wore masks, we stayed home when we could, we used FaceTime and Zoom more than we ever thought imaginable.  Now, more than two years after COVID-19 began, as is want to happen, art is imitating life, creating this new subgenera of film: the pandemic movie.  There have been several films that were not only shot during the pandemic, but are tackling the subject matter head-on, telling stories against this recent time of crisis.  Writer-director Katie Holmes’ film, Alone Together, is the newest entry of this kind, a light romantic comedy set right at the start of the world unravelling.

June (Holmes, also starring) is a journalist in New York City.  She’s a food critic, often seen at fancy parties with her boyfriend, John (Derek Luke) or enjoying a decadent meal at a restaurant while taking notes in a journal.  But, when the pandemic hits, thinking all things temporary, John decides it’s time to get out of town and rents them an airBNB in the country.  With closures and train cancellations June takes what must be the most expensive Lyft ride of all time to the lovely home, only to find it already occupied by an accidental second renter, Charlie (Jim Sturgess).  When John sends June a text saying he’s changed his plans to stay in the city to take care of his parents, June and Charlie decide to make the most of an awkward situation.

Things start off somewhat contentiously – Charlie automatically guesses, correctly, that June is from the upper west side based on first impressions, and June looks down upon him for… drinking beer.  In fact, she looks downright disgusted when Charlie kindly offers her one.  However, her lack of love for hops aside, the two eventually, as you might imagine, hit it off.  They drink together (she has wine, obviously), they sing karaoke.  They eat many a McDonald’s meal, so many in fact that the fast food giant should have paid them for advertising.  I’m sure craving a Big Mac now.  They bond over the fact that Charlie doesn’t know what Crazy Eights is.  They do these things as former New York Governor Andrew Cuomo’s voice narrates dismal updates of the pandemic.

Of course, you know where this is going, that Charlie and June are destined for one another and that this accidental ‘meet cute’ will have a happily ever after.  And that’s okay.  A little optimism and hope against the backdrop of a horrible, anxiety-ridden time is not a bad thing.  And I’m sure it even happened in a few real-life circumstances.  The problem with Alone Together is that June and Charlie’s love story isn’t terribly compelling.  This is a story about very normal people (albeit very privileged people to be existing in the beginning of the pandemic this way) that get to know one another through fairly boring, mundane conversation.  And yes, perhaps this is how it goes, but it’s certainly not cinematic.  It’s actually pretty dull.

Holmes is charming, as she often is on screen, and Sturgess is fine, even if his character isn’t terribly well developed.  In fact, development is the real issue with Holmes’ screenplay.  It’s just that things unfold very slowly and without much consequence.  We spend hardly any initial time at all with John and June together, only just a few frames really, to the point where we have no investment in them.  It does make accepting Charlie and June’s relationship easy, especially when June talks over FaceTime with a friend (Zosia Marmet) about whether John might be cheating on her, something that is never given closure nor really mentioned again.  However, when John eventually does arrive at the Airbnb it’s easy to have almost forgotten about him.  Their reunion and interactions are almost devoid of meaning.  In fact, the most emotional part of the film doesn’t involve either couple at all, but when Holmes receives some bad news in a phone call.

As a director, Holmes is adequate and Alone Together is fine, but unfortunately bland.  It relies on its COVID landscape for any drama and conflict instead of looking to its characters. If you want a ‘strangers have to room together during the pandemic and fall in love’ film, then I would check out Roshan Sethi’s 7 Days, which I feel played its hand quite a bit better.  And, so far as lockdown films go, Together starring James McAvoy and Sharon Horgan is, in my opinion, the best of the bunch.  Albeit far from a traditional romantic comedy, that film captured lockdown time with incredible authenticity.

I guess the question is, after living through the pandemic so recently (and still!), whether or not these films can truly find an audience, especially now that the general public seems to be suffering from COVID burnout.  Now more than ever we are a people divided on coronavirus, with things like masking and vaccination increasingly politicized and polarizing.  So perhaps it’s telling that for me the best and most affecting moment of Alone Together is when June arrives home to New York amidst the banging of pots and pans, an entire city out on their balconies showing support for health care workers.  It’s a snapshot in time when we were all actually alone yet together instead of against one another, and it’s a moving reminder of the power of our collective humanity.  If only the central story could be so convincing.

Alone Together premiered at this year’s Tribeca Film Festival and will be released in theatres July 22nd, arriving on digital and on demand July 29th.