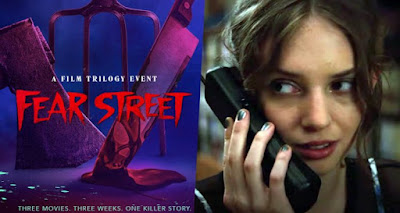 Netflix released the highly successful Fear Street trilogy on their streaming service back in 2021. The young adult horror series came and went with no word about any type of continuation of sequel. Well, it appears that they are currently working on another set of movies based on the original book series by R.L. Stine. Although it hasn’t been confirmed by anyone at Netflix. When asked about it, R.L. Stine had this to say to Y!:

“I hear rumors about more Fear Street movies for Netflix, because the first ones did so well last summer. Those films kind of shocked me, because they were all R rated and I’ve never done anything R rated! All those teenagers were getting slashed. I was like, ‘Suddenly I have a slasher movie'”.

The first three movies took place in 1966, 1978, and 1994 and were one interconnected trilogy of slasher films with a supernatural element. They didn’t quite spawn a Stranger Things type massive following but were an overall hit for the outlet. Today, Bloody Disgusting says that they can confirm Netflix is currently hard at work on another set of films. We’re hoping its another trilogy.